This week in Harcourt Terrace all the classes celebrated Science week. The children all became scientists in their classrooms. Let’s see how they all got on!

Second class learned all about Energy this week. They learned about different types of energy such as solar energy, wind energy and electricity. We begin to understand how everything around us is made of atoms – both positive and negatively charged. Sometimes with a bit of friction these atoms can become charged! This is called Static Electricity.

We completed an experiment on the power of Static Electricity. We investigated weather a balloon charged with static electricity could attract different materials. Our two items for our experiment were salt and rice krispies.

First, we made a prediction on what we thought would happen. We completed the experiment and recorded our results with diagrams just like real Scientists do!

We used food colouring to show how plants absorb water up their stem. We checked our heart rate after resting and after moving to see how much it changes. We made paper helicopters and got them to fly and spin!

Finally, we worked in teams to build ramps that our toy cars can speed down. We figured out ways to make our cars go fast and slow on the ramp, and even tried to build a really long ramp in our classroom! Here are a few pictures of our ramps.

Junior and Senior Infants were busy building rockets, making snowman coats and having a Science show and tell.

Tony and Ronnie’s classes made Volcano’s erupt, experimented with magnets and Checked what floats and what sinks. They also made a bottle of coke explode with some Mentos! 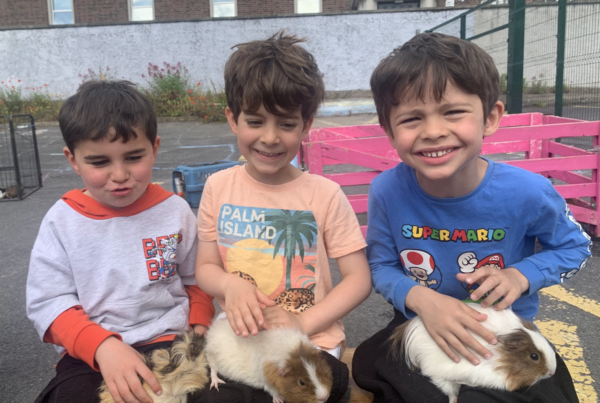